If you ask Mia Kyong Davis what it’s been like to operate a restaurant in downtown Vista for almost three years, she would describe her experience with one word: Incredible.

Davis, the owner of Mikko Sushi, said she owns restaurants in other nearby localities but the support she has received from the Vista community, and the city government itself, has been unmatched.

Vista is the place to invest

“I’m very thankful to be a business owner in Vista,” Davis said. “And, I would tell anyone looking to open a restaurant to invest in Vista.”

Davis is one of many new entrepreneurs who have invested in Vista in recent years. From breweries to American comfort food to fresh sashimi — downtown Vista has become a diverse and vibrant food scene attracting entrepreneurs and hungry patrons from all over San Diego County. With more than 50 restaurants in or around downtown Vista alone, residents and business owners have praised the vast improvements made along Paseo Santa Fe and the support they’ve received from the community that they say will help downtown grow in the years to come.

The redevelopment of Paseo Santa Fe was two decades in the making but was completed at the end of 2020 — one full year before the expected completion date. The three-phase project included a multi-layered approach of visible improvements such as roundabouts, streetscape changes, added housing and more. In addition, the city installed new sewer, water and drain lines. But, downtown came to completion with the addition of a handful of new restaurants.

Davis — who also owns restaurants in Carlsbad and Escondido with plans to open a fourth location in the Scripps Ranch neighborhood of San Diego —said she was attracted to Vista because of the focus the city made to improve the downtown area.

“The city worked hard to improve the downtown, making it very attractive and business-friendly,” Davis said. “City staff worked with us throughout the construction process and went out of their way to help us. The support was overwhelming.”

What’s also overwhelming is the response from customers. Davis noted there’s often a waiting list to get a table with customers from within the city and outside of Vista flocking to the eatery.

“I’m very grateful that local residents have been so supportive, especially during the pandemic,” Davis said. “I’m very thankful to be a business owner in Vista.” 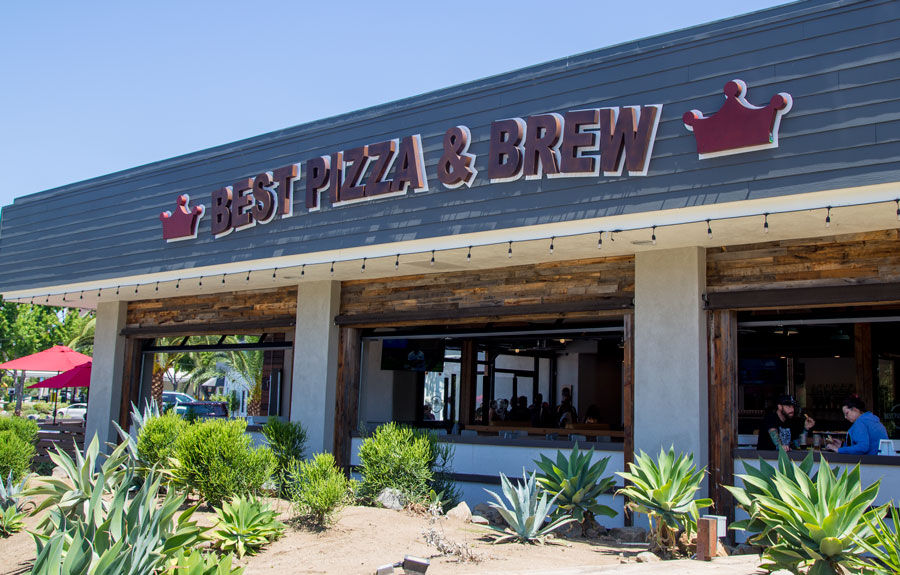 Joey Freis, the co-owner of Best Pizza & Brew, echoed comments by Davis. With locations in four other areas, he said no other city has gone out of their way to help them.

Freis, who opened the Vista location in July 2021, said he and his business partner, Mitchell Millar, were drawn to the city because of the location and clientele.

“The building and redevelopment of the street really matched our concept,” Freis said. “A lot of our customers, who were coming to our Oceanside location, were from Vista so we knew there was a demand for quality food in Vista.”

Although Freis said his time in Vista has been short, he can see that there is a growing desire for good food in the city.

“We hope more people follow us over here and bring good food,” he said. “More business brings business for everyone – especially in downtown. We’ve never had any support like this.”

Millar, Freis’ business partner, said he envisions more eateries and other businesses coming to Vista in the future.

“Vista is a family community and always welcoming,” Millar said. “I hope many other restaurant owners like myself can experience all the great things Vista has to offer.”

Shelly Kentner and Hector Estrada opened one of the first restaurants, 508 Tavern, in the redeveloped area in 2017. Kentner, a Vista native, said she’s been thrilled to see the growth of her hometown. She believes other natives are just as excited and that will attract more businesses to the city.

“I think Vista locals are excited to have more varieties of food outlets to choose from on a daily basis,” Kentner said. “Vista is in the process of developing a diverse culinary experience for all our locals and neighbors. I imagine in the next five years, people will be making Vista a continuous foodie destination where households near and far will be raving about.”

Although downtown Vista has already become a hotspot for residents and visitors, Kevin Ham, Vista’s director of economic development, said the city is just getting started. With space for more retail and restaurants, Ham said the community continues to be a draw for businesses and people.

“The growth that Vista has seen over the years shows that people throughout San Diego County are searching for the perfect place to live, eat and thrive,” Ham said. “We’re happy Vista can fulfill the needs of all people, particularly entrepreneurs.”